The Art and Science of Family Dinner 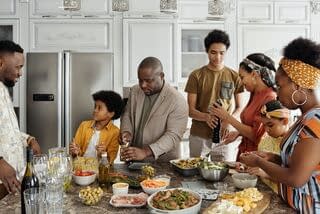 The news about declining COVID-19 rates around the country may foreshadow a return to more “normal” rhythms and patterns of behavior. Among the casualties of online learning and socializing may have been traditional family dinners. An October 2021 article, “More Parents Are Rejecting Nightly Family Dinners – And Experts Say That’s OK,” examines parents’ anxiety from research studies that seem to tell them they’re doing everything wrong.

Author Julie Kendrick posits that skipping family dinners is seen as the worst offense, noting, “The media often has summarized the studies this way: If you aren’t eating dinner together nightly, your kids are doomed to lives of misery and mayhem” (Kendrick, 2021). Parents’ stress is amplified by the knowledge that their late working hours and their children’s conflicting school activities and sports are the two most common obstacles to maintaining family dinner schedules.

Professor Dianne Neumark-Sztainer, division head of epidemiology and community health at the University of Minnesota and a principal researcher for Project EAT (Eating and Activity over Time), speaks in the same article to a “protective effect” for families who eat together. She offers, “I personally think there’s something magical when people break bread and share their days with one another” and cautions that there is a growing chorus of voices suggesting that perhaps too much pressure has been placed on parents, maybe especially moms, to stage a family friendly meal every day.

The article also cites Katja Rowell, a medical doctor and responsive feeding specialist, who says, “Our society puts far too much on mothers’ shoulders, while offering little support. The pressure to do family dinner ‘right’ can feel defeating and can even make families less likely to eat together.” Others say there should be grace and flexibility and that it’s not about the dinner but about interacting with each other.

That’s the art of family dinner.

Perhaps a one-size approach is not the best. Flexibility seems key, as is finding other times and ways to stay connected as a family unit.

So, what’s the science?

The National Center on Addiction and Substance Abuse (CASA) at Columbia University reports that that the more often children eat dinner with their parents, the less likely they are to smoke, drink, or use illicit drugs. The center compared teens who dined with families five or seven times a week with those who did so twice or less. Those who ate together more often were four times less likely to smoke, 2.5 times less likely to use marijuana, and half as likely to drink alcohol.

CASA says that teens who regularly eat dinner with their families are also more likely to get better grades and do better in school. Better grades are associated with a lower risk for substance abuse. Teens who eat with their families fewer than three times a week report that the TV is usually on during dinner or that the family does not talk much. Conversely, CASA reports that families in which teens are frequently present at dinner find lots to talk about. Common topics include school and sports; friends and social events; current events; and even family issues and problems.