High Schoolers Who Took Remote Classes During Pandemic Experienced a “Thriving Gap,” According to Duckworth-Led Study

The academic damage inflicted by the pandemic is still being measured, but early indicators are ominous. Exam scores collected periodically by states , cities , and nationwide testing organizations show that a large number of K-12 students have either stagnated or lost ground in their studies during the COVID era. School closures and prolonged doses of virtual instruction are usually identified as the culprit.

But since classes first went online last spring, parents and educators have been equally anxious about the pandemic’s impact on children’s inner lives. And while those worries have often focused on the developmental opportunities denied to kindergarteners and elementary schoolers, older students have also suffered while isolated from friends and teachers.

Research published today by the American Educational Research Association provides concrete evidence of the setbacks experienced by adolescents in remote learning. In a two-part survey conducted both before the emergence of COVID-19 and during its peak, high schoolers learning online said they were worse-off socially, emotionally, and academically than their peers learning in physical classrooms. The “thriving gap” between the two groups was more pronounced among older participants, the authors note.

The study was conducted by a group of authors at Temple University, Mathematica Policy Research, and the University of Pennsylvania, including prominent psychologist Angela Duckworth, a MacArthur Fellow best known for her writings on non-cognitive traits like grit. In an interview, Duckworth said that the post-COVID distancing “seems to have a deleterious effect in every aspect of thriving, in every way we were measuring it.”

“What we wanted to underscore was that there’s a consistent signal across these three domains,” she said. “We are finding this across social, emotional, and academic learning.”

The survey was administered through Character Lab , a nonprofit research consortium Duckworth co-founded in 2013. The group’s Student Thriving Index measures self-reported ratings of student well-being and school routines, which students complete at the direction of teachers during class time. A sample of roughly 6,500 students across Florida’s Orange County School District participated in the survey both in February 2020, just before the pandemic shuttered campuses, and October 2020, after they had been given the choice of whether to return to in-person instruction. About two-thirds of participants chose to stick with virtual classes. 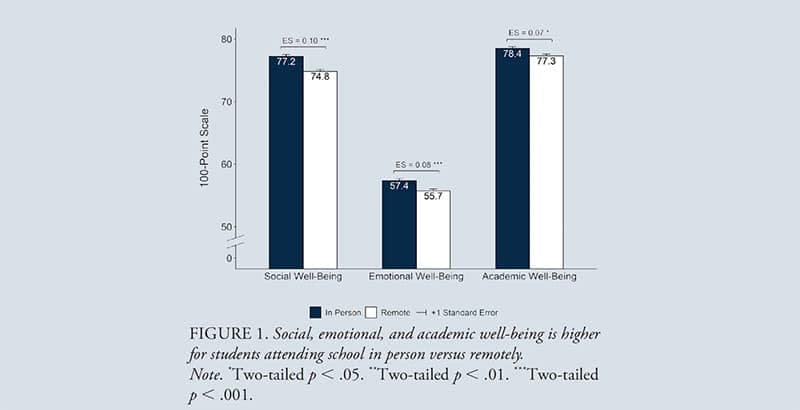 Students were enrolled in grades eight through 11 in the spring, but all were attending high school during the questionnaire’s second round. In both iterations, they were asked to assess themselves by multiple test items related to social relationships (example: “In your school, do you feel like you fit in?”), emotional state (“How happy have you been feeling these days?”) and academic engagement (“Compared with other things you do, how interesting are your classes?”).

Continue reading the rest at www.the74million.org