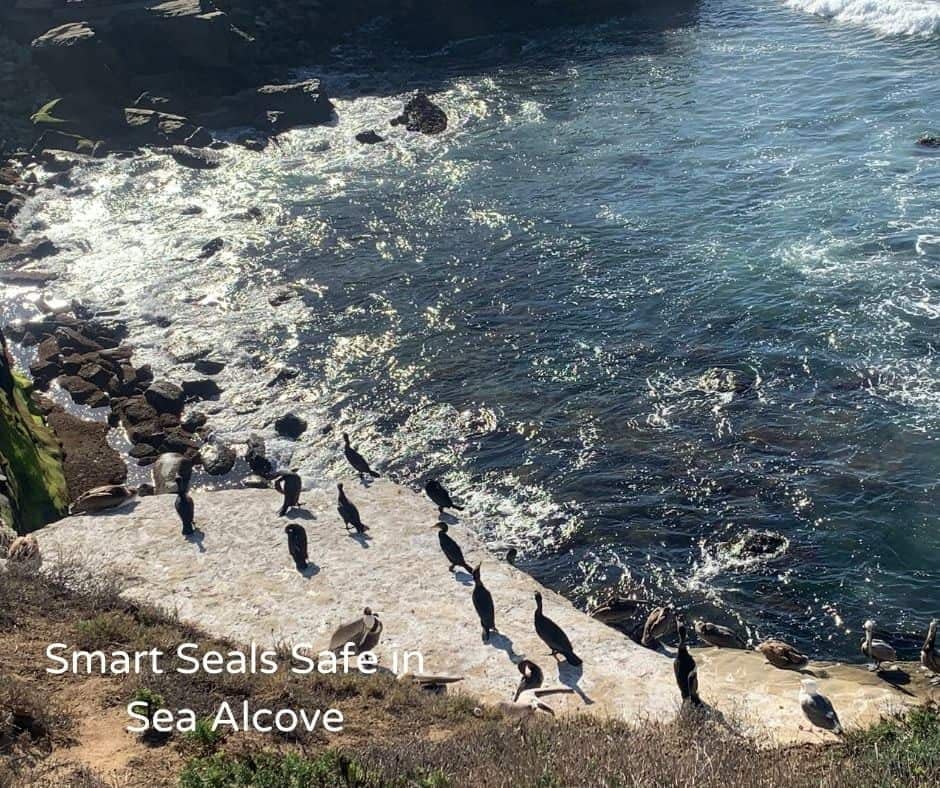 I took my daughters along the Southern California coastline over the weekend and had the good fortune of observing newborn seals and two mother seals in labor up close. In one beach alcove, around 50 seals swam, lounged about, and nursed their young comfortably in the safety of numbers and natural environmental barriers.  Every year, that portion of the beach was blocked off from the public for baby season.  Even though we wanted to get much closer to the baby seals, we understood why they needed their space.

“It is vitally important that we do not interrupt the bond being formed between a mother seal and her pup. The mother often leaves her pup on the shore while she goes off to feed and if she senses danger there is a strong chance that she will not return,” said Ashley Stokes, manager of Seacoast Science Center Marine Mammal Rescue.

But as we walked back, a handful of seal families appeared on an open area of the beach, surrounded by a crowd.  There were two mother seals who have been in labor all day, and a park ranger told us that they were spooked by some dogs off leash earlier in the day.  She had been battling the crowds to keep mothers and babies safe.  Thinking it’s strange why these few seals separated from the main group and safe sea alcove, I started talking to the ranger, and discover that 15 seals were originally born on this exposed section of the beach, separated from the rest of the pod. Since then, they’ve returned year after year to the same ill-chosen, dangerous site for breeding season.

People say, “history repeats itself.” At the same time, Einstein said insanity is doing the same thing over and over and expecting different results.  Are people insane then?  Or ill-fated like those 15 seals who happened to be born in a disadvantage place, felt fear every time they returned, perhaps froze, but never thought, never reflected and thus “sealed” their fate?

There’s a lot of things we can’t control and trying to do so is a great source of unhappiness.  We can’t control who our parents are, our DNA, but we can shape our relationships by how we interact with people and our gene expression.  The first step is to allow ourselves to feel because that’s how we truly get to know ourselves and can begin the next step.

When people ask, “How are you?” the automatic and often seemingly only acceptable answer is, “I’m fine, thank you.” I’m not advocating that you pour out your heart to every passerby—the social backlash from it would be bad for your emotional wellbeing.  Other people can choose to pretend like you always feel fine and ignore your emotions—YOU SHOULDN’T IGNORE YOURSELF!

Your feelings are a part of you, and as important as the physical pain sensation we have to a burn.  You need to accurately feel in order to think clearly and plan wisely.  Even with all out technology today, YOU are still the only person who feels what you feel and can CHOOSE what to think, what to do.

People pick up bad habits (replacement behaviors) because it’s the natural, unthinking instinct to go for the easiest path.  When we face rejection, trauma, disappointment, or any myriad of more complicated emotions, it truly is more immediately pleasant to avoid, escape or deny, but we do so at a cost to ourselves that we cannot afford, damaging self-esteem, increasing anxiety, and creating mistrust, etc.

How can curaFUN battle the path of least resistance when it comes to personal growth?  We’ve been working hard on a collection of self discovery activities (games, surveys, interactive videos) for our members so that understanding our feelings, default reactions, habits is not only helpful, fully supported but also entertaining.

Caitlyn Wang
Caitlyn has scored above 99% every standardized tests she's taken since the ripe young age of 7, from the Wechsler IQ test, ABSRM piano performance exam to SAT. She is a proven senior business leader with global marketing, product development, supply chain management backgrounds who likes to tackle the impossible and has managed teams on three continents. Equally important, she is a devoted mother of two, a skilled pianist, certified yoga and aerial teacher, vocalist and lifelong learner.
Subscribe
Login
0 Comments
Inline Feedbacks
View all comments
wpDiscuz
0
0
Would love your thoughts, please comment.x
Report this comment